Foreword by Aasif Mandvi
Praises
"The poetry of ordinary North American Muslims lives is not often recited, and is almost never anthologized. That is precisely why this volume is so important. It tells us the stories of Canadian and American Muslims in their own words…"
Amir Hussain, Ph.D., Professor of Theological Studies, Loyola Marymount University, Los Angeles

"This anthology of liberal and progressive voices is an important and heretofore missing thread in the complex and beautiful quilt of being Muslim in the modern world…."
Saleemah Abdul-Ghafur, Editor, Living Islam Out Loud: American Muslim Women Speak

"This is a timely book, engaging and honest. A testimony to the universal human spirit that connects us all."
Reza Aslan, author, professor, Middle East expert and founder of Aslan Media, Inc.
"…Muslims for Progressive Values (MPV) have refused to shy away from justice issues or from their faith.Not only have they stood with the LGBT community no matter the cost but they have taught us that it is not inconsistent with Islam to do so.This book promises to show the world the inescapable connection between belonging and equality."
Sharon Groves, Ph.D., Director, Religion and Faith Program, Human Rights Campaign

"… this anthology is unique in its inception and goal; it adds an array of Muslim voices that have been buried by extreme and orthodox voices within Islam…"
Mehnaz M. Afridi, Ph.D., Assistant Professor of Islam & Director of Holocaust, Genocide and Interfaith Center, Manhattan College, NY.

"…With its unwavering support of the LGBT Muslim community, Muslims for Progressive Values is paving the path for a welcoming and inclusive Islam that values all of its followers, regardless of their sexual orientation or gender identity."
Faisal Alam, queer Muslim activist, speaker & writer, Founder, Al-Fatiha Foundation for LGBT Muslims.

Order now!
For orders above 10 books, contact us for discounted shipping.
All
proceeds benefit
MPV. 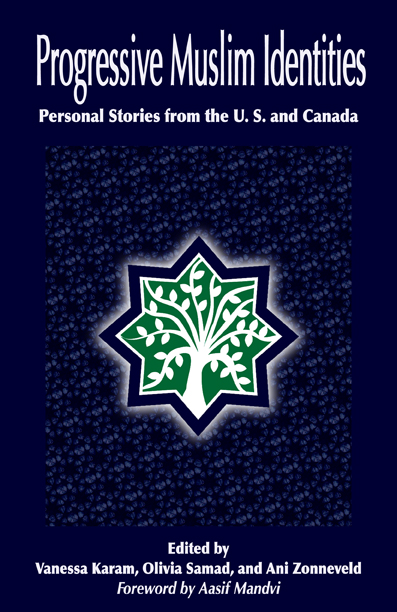 Progressive Muslim Identities answers the often-asked question "Where are the progressive Muslims?" Here, gay, straight, black, white and brown Muslims from the United States and Canada narrate their personal stories. Their powerful voices highlight human dignity, freedom to choose how one lives out one's faith, and the inner strength it takes to do so.